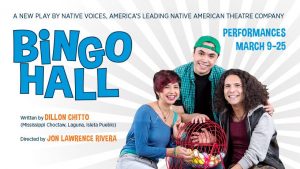 Photo courtesy of Native Voices at the Autry Facebook page.

Reviews of plays by and about Native people tend to include words like “powerful” and “heartbreaking.” But here’s part of the review of Dillon Chitto’s Bingo Hall in the Los Angeles arts journal Stage Raw:

“Bingo Hall is a delight, a deft and witty comedy that recalls vintage Neil Simon.”

A delight? Vintage Neil Simon? Wait a minute. … Aren’t plays (and movies and television shows and books) about Native people supposed to be bittersweet, if not tragic? 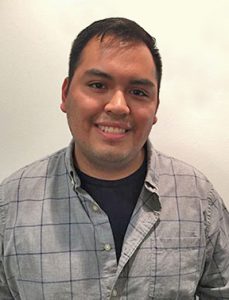 Chitto is among the playwrights widening the theatrical portrayal of Native people, in this case by writing a very funny play. Chitto, who is enrolled Mississippi Choctaw, now lives in Chicago, but he grew up in Santa Fe, close to his mother’s family in Isleta and Laguna Pueblos. That’s where Bingo Hall takes place: At a bingo hall in a Pueblo community. The main character, Edward Anaya, works there as a caller, but he’s about to graduate from high school. Like many young Native people, Edward must decide whether to stay in his community or go away to college. The coming-of-age story that ensues involves a Pueblo origin story as well as interplay between Edward’s friends, family, and community. The play will be performed March 9 to 25 at the Autry Museum of the American West in Los Angeles. (The audience played an actual game of bingo prior to the March 17 performance!)

FAAM spoke with Chitto about Bingo Hall and the importance of comedy.

So much Native American literature/film is tragic or at least bittersweet. Why is it important to have some lighter comedy in the canon?

Chitto: I think it’s important to have lighter comedy in the Native American canon because our lives are not always tragic and bittersweet. We have times of joy, comedy, as well as sadness. Native communities have a great sense of humor. We just have to look at small rez community bingo callers, powwow MCs, and at our gatherings. So, with all this comedy around us, why not add it to the canon? That’s why I chose to write Bingo Hall – to honor all the laughs my community, friends, and family have given me.

FAAM: I know Bingo Hall has opened to a diverse audience, not all Native people. How has the audience reacted to the humor in it?

I was told, and I agree, that a non-Native audience might be scared to laugh. This may be because they don’t want to offend Native cultures, so in the play we had to give the audience permission to laugh. The actors under the direction of Jon Lawrence Rivera really helped sell the comedy and invite the audience to join in on the humor.

LaVonne Andrews (Tlingit, Raven clan) as Mrs. Zuni and Kholan Studi (Cherokee) as Edward in a scene from Bingo Hall. Photo courtesy of Native Voices at the Autry Facebook page.

FAAM: Are there plans for Bingo Hall to be put on at other locations?

Chitto: I would absolutely love to put Bingo Hall on at other locations! Right now, there are no immediate plans, but I am hoping that somehow it can be brought to as many places as possible. My big dream right now is that Bingo Hall could be performed back in New Mexico since it takes place in a Pueblo community.

FAAM: What’s up next for you as a writer?

Getting Bingo Hall produced by Native Voices at the Autry has been an absolute blessing. Everyone at Native Voices is overwhelmingly supportive and strive to make Bingo Hall the best play that it can be. They are an extremely important organization because they are the only Equity theatre company dedicated to producing new work by Native writers. I don’t think I would have had this fantastic opportunity of seeing Bingo Hall come to life it wasn’t for them.

I’m currently working on a couple of new plays. I’m extremely excited about each of the projects and the opportunity to bounce around whenever new inspiration strikes. I think after going through the process of getting Bingo Hall produced, I have a new fire inside me to write!