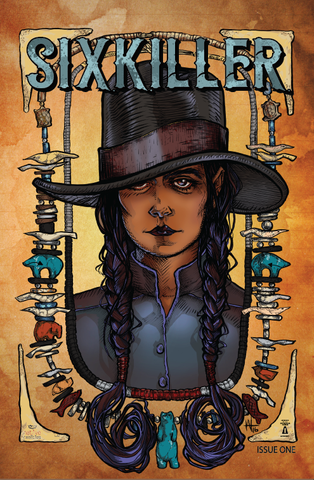 Last week, the first copies of Sixkiller, the latest comic from Native Realities press, were sent out across the country. Described as “Kill Bill meets Alice In Wonderland” by author Lee Francis IV (Laguna Pueblo), the comic tells the story of Alice Sixkiller, a Cherokee girl on a quest to avenge the murder of her sister. Alice has schizophrenia, and her journey involves coping with her condition as she encounters beings from the stories and legends of her tribe. Francis is the founder of Native Realities press, which publishes books and comics by and about Indigenous people.

Sixkiller is illustrated by Tongva-Scottish artist Weshoyot Alvitre, a veteran illustrator of comics, books, and video games, including several with Native Realities. I spoke with Alvitre about her part in creating the world of Sixkiller.

Stacy Pratt (FAAM): Lee Francis describes Sixkiller as “Kill Bill meets Alice in Wonderland set in Cherokee country.” How did you come up with a style for your illustrations, especially the main character, Alice Sixkiller?

Weshoyot Alvitre (WA): The minute I heard the pitch to this story a light in my brain went on that maybe…just maybe I could try something I have always wanted to try with the art style in this book. I have always been a huge fan of the original illustrations to Alice in Wonderland. I had always wished there were more drawn, as they both complement the writing style of book but also make it weirder and more iconic than anything ever could have. There have been many artist renditions of the book over the years, but the odd proportions, fantastical imaginings and whimsy of those original illustrations really have held ground over time. I told Lee from the beginning that I wanted to try to pay homage to the original Alice illustrations. I had seen Jeremy Bastian call back to this era of illustrations in his Cursed Pirate Girl series and his style overall. I had been working in a lot of Victorian reproduction work for some commercial art I was doing years prior to the book. I felt like I had enough under my belt to attempt it and create a style I had not yet played with before. The timeline for this book also allowed me that artistic freedom. I don’t think I could have tried this on a monthly book. It’s rather time-consuming.

FAAM: It takes a long time to produce a comic book. How long were you working on Sixkiller, and what made you decide to take it on?

WA: I was working on Sixkiller on and off for over a year I think. We had one project fall through, and Sixkiller was then pitched. But I was also working on various side shorts, coloring Tribal Force [also from Native Realities], and doing some of my own pieces as well. Lee allowed me the time not only to play with the style but get it down before I started on final pages as well. I think after I drew up the initial cover teaser image to issue #1, I realized that the style I wanted to have for the book could actually be brought to life. I had worked with Lee on various things before, so I trusted him as a writer. But when I read the script to issue #1, he actually surprised me as I didn’t expect a book quite this dark and gritty behind the guy who is so upbeat.

FAAM: You and Lee aren’t Cherokee, but this comic is set in Cherokee country. How did you approach working with the traditions of a different Indigenous nation?

WA: Lee let me know from the start he was using several colleagues of his as reference and overview for this story, for language and alphabet research, etc. for future issues. I have trust that when Lee does a story, he will stand behind it 100% and not only do his homework but also make sure it has been read over thoroughly, and various cultural sensitivities are well discussed. We actually made a change to one of the pages in this book, and it was in regards to how one of the women in the book was shown. He not only addressed concerns about how a woman may perceive it but also hit on the fact that some of our readers will be trauma survivors. And I think after seeing a response to Deer Woman [also from Native Realities], it was eye-opening in how to handle future books and readership. 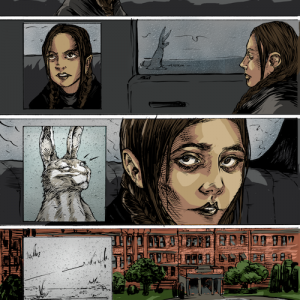 We had a few conversations on the best way to handle the original image visually, so we were respectful to a variety of potential triggers. Being a woman myself and a storyteller, I felt the original image helped to move the story along, but I had not thought about how hard it may be for some to see, even in the comics medium. And so it was changed, and a lot of that approach to sensitivity was from Lee having various conversations from many aspects of readership.

In regards to this story taking place in Cherokee country: It is something I considered before taking the book on. I never want to step on toes or into tribal customs or stories that are not my own. With that being said, I also feel the need to help bring a modern story like this to fruition, to give representation where there is none. I feel that both Lee and myself really put time and energy into doing justice to the people we are creating within the story. And I hope that this book gives a representation of modern Native voices where there is currently such a lack of it in the comics medium. I can only try the very best I can. And if I miss something, I hope that a future dialogue can be brought up to discuss better ways to create or represent.

FAAM: Most Native people recognize the Tongva, but your nation doesn’t currently have federal recognition. How has that affected you as an artist working with Indigenous-based projects like this one?

WA: Honestly for the longest time, I refused to attach my name to any Native projects. Growing up was a combination of seeing my dad in his ties with Native issues, and the effects and complications of intertribal and governmental politics in regards to federal recognition, legitimacy, funding and forwarding representation and sovereignty. In school, I was constantly pulled in “Indian Education” taught by non-natives or called out in various opportune times in classes from elementary school all the way into college as “the Indian” in class. In college, I was constantly trying to find merit and portfolio based art scholarships because I did not qualify for any of the many Native based ones due to the lack of federal recognition and tribal ID #. It wasn’t until I was interviewed by Michael Sheyashe many years after I started working in comics, and was not only introduced to more working Native artists within comics, but also this voice of the Indigenous perspective that so many of us had that worked so well in the sequential art genres [that she began working on Native projects]. 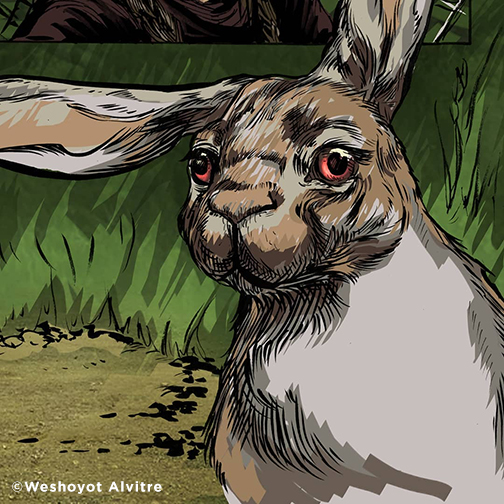 The issue of federal recognition, or lack thereof, still affects me in some ways. I was just sent an invite to be included in a show within the Santa Fe Indian Market, but I won’t qualify due to my lack of tribal credentials in regards to federal recognition. I learned early on that sovereignty is something no one and no government can take away or interfere with. Although there are currently stirrings within younger generations of Tongva here in southern California for federal recognition, after decades of mudslinging and fractured factions, it still has wrinkles to work out. I do hope the work I create is an example of the person I am and a reflection of how I was raised. I am currently working on putting my own voice to stories from my tribe, and I hope I can devote my time and energy in the future to breathing life back into our people, as it is much needed.

FAAM: The #drawthisinyourstyle challenge based on Alice Sixkiller was great! What was it like to see renditions of this character you lived with for so long come across your social media?

Yes! I was really surprised to have so many amazing artists do their own renditions of the character. I had been advertising the book on and off for the last year, but I figured it would be some time before I saw a response or got feedback on her. So to have some of my favorite current Native comic artists, like Dale Ray Deforest and Shaun Beyale, try their hand was quite the compliment!

FAAM: You have several projects going on right now, including When Rivers Were Trails. What can you tell us about them?

>Yes, currently I am doing a book with the Cherokee writer Traci Sorell, for Kokila Books, which is the newest imprint from Penguin. I feel so blessed to be working with Namrata Tripathi on this, as she is heading this new imprint. The goal is for much-needed diversity in literature for children and young adults, which is exactly what Lee Francis is doing with Native Realities in the comics medium. So I feel so honored to be working on projects for both these areas with the same goals in mind. I am also working on the video game component to the Lessons of Our Land curriculum by the Indian Land Tenure Foundation with recent Guggenheim Award recipient and celebrated game designer Elizabeth LaPensée. The game is called When Rivers Were Trails. This game is being described as a “Native Oregon Trail” in which you play as a Native character during the 1890s and experience the effects of westward expansion and colonialism and see the resiliency of people of the era. The game is set to work with classroom education and reach 400,000 students. I was fortunate enough to write in a few scenes as well, to give representation to my tribe, so it felt good to be allowed space to test my writing chops.