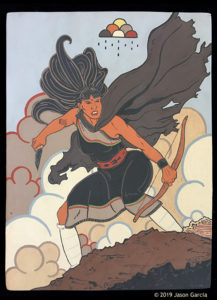 An image of a powerful woman resided in the changing gallery space at the Ralph T. Coe Center for the Arts, as part of their exhibition Imprint, that was on display through March 2019. Warrior Maiden Muse from the Tewa Tales of Suspense, by Jason Garcia, a Tewa artist from Santa Clara Pueblo, expresses the power of Tewa culture and women in the form of a painted clay tablet. The piece is placed on a stand in a corner, next to five works on paper by the same artist. The figures depicted are predominantly women, aside from Come and Talk to Me, in which a man and woman converse. The dynamism of Warrior Maiden Muse provides a counterpart to the more static poses of the women in the other work.

Indeed, the warrior woman in the piece is all action. She is captured in a vibrant pose, caught between standing and crouching. Her skin is tanned, with a reddish hue. Her body twists, and her head is turned. She is angry — her brows furrow and she bares her teeth. Her long black hair blows upwards behind her, dramatically caught by the wind. Her iconic straight bangs, a customary style worn by many Pueblo women, is largely undisturbed, and parts slightly in the middle. An earring sways. Muscles emerge from her arms. She extends her left arm downward, her hand gripping a bow so tightly that tendons emerge. On her wrist, she wears a plain black bow-guard. In her right arm, she holds a knife.

She wears a torn dark grey cape with ragged edges, which flies upwards. Beneath this, she wears a manta, attached at her right shoulder. A red belt with black design elements wraps around her waist. Her legs are wrapped with white hide, the bottoms of her moccasins out of view. She stands on an outcropping of earth, which partially obscures her feet. Large rounded billowing clouds — perhaps of smoke — rise behind her. The sky is a grey-blue.

While most of the composition utilizes realism, Jason Garcia has incorporated an important symbol in the sky, that of a classic Pueblo rain cloud. The cloud itself builds upon half-circle tiers, and rain is represented by short dashes that emerge from the half-circle shapes. The presence of the rain cloud establishes the cultural realm in which the woman exists — this is Tewa territory. 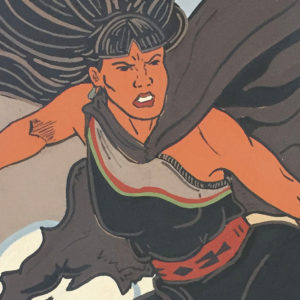 The scene is primarily rendered in flat, but bright and bold, opaque mineral pigment colors, and bold lines, and in select areas, detailed with fine lines. The figure and the foreground are rendered in black outlines (except for her hair, which use grey lines). Garcia paints using the visual language of comic book art, in particular, the comic book cover, though he uses mineral pigments instead of India ink, as would be used in classic comic book illustrations. The title of the piece, Warrior Maiden Muse uses the expressive language of early comic books and paperbacks. The work is painted on a hand-made clay tile with mineral pigments — this tablet becomes a comic book cover.

This is not Garcia’s first time referencing comic books. His Tewa Tales of Suspense: Behold … Po’Pay!, painted on clay, appeared in the Museum of Indian Arts & Culture’s exhibition Comic Art Indigène from May 2008 through January 2009. [1] In the piece, Garcia fully embraced the language of a comic book cover, including a title in all caps directly on the piece at the top, “Tewa Tales of Suspense,” and a phrase at the bottom right, also in all caps, “Behold… Po’Pay!,” as well as the date (1680) and the issue of the comic. Additionally, as Hansen and López explain on the Newberry blog, Garcia tackles the subject of the 1680 Pueblo Revolt in a pre-existing collection of prints named “Tewa Tales of Suspense!”, which were obtained by the Newberry:

His bold take on the protagonists of the Revolt as superheroes, fighting for truth, justice, and the Pueblo way offers an important corrective to the imbalance in the historical record… With such powerful imagery, Garcia brings the 1680 rebellion to life. The comic-book format allows him to present a troubling aspect of American history in a non-threatening manner. The use of vibrant, comic-book colors helps the artist draw the viewer into considering controversial aspects of our country’s history while also leaving a deep and memorable impression. In so doing, Garcia makes a painful episode in Native American history accessible to a wider audience. [2]

The general assumption of filmmakers for the first three-quarters of the century of filmmaking has been that the male has the dominant role in a male-female relationship, but it was unthinkable that an Indian, even though male, might have dominance over a white woman. An Indian woman— usually a “princess” — could give herself to a white man, but a white woman could never give herself willingly to an Indian man. On the other hand, a white man would be naturally dominant over any Indian or any woman, so his seduction and/or love of an Indian woman is tragically romantic and provocative, forbidden perhaps, but therefore titillating. [3]

Garcia’s depiction of his “Warrior Maiden Muse” stands in stark contrast to that idea, presenting a woman of power and strength. Who is the foe that this warrior woman faces? It is left to the imagination of the viewer, but given the subject matter of his previous work, it is reasonable to assume that she confronts colonial Spanish forces. Garcia depicts the woman as if she is positioned above the viewer. In this way, she takes on a position of power, to be admired and feared. Garcia deliberately includes a woman as a part of the resistance. As previously noted, Garcia is unapologetic in his clear references of Tewa cultural elements in the woman’s appearance. She is not at odds with her culture, rather she is firmly placed within the Tewa world. She is a hero for Tewa people. The depiction aligns with the sense of cultural pride expressed by Garcia in a quote in the Pasatiempo article “Four Native artists spread the word about the Pueblo Revolt”:

“The Pueblos in New Mexico still practice their dances, their ceremonies, and their language is still spoken. We’re thankful that we’re still living in Santa Clara Pueblo. We still know what the traditional name is: Kha’p’oo Owinge, that means ‘rose path.’ We’re still connected to our ancestral village of Puye.” [4]

Many Native peoples have honored women in their cultures, and Garcia’s piece follows this cultural trajectory. Garcia’s depiction is particularly timely as the mainstream catches on to the idea of powerful women, as Hollywood blockbuster movies increasingly present more female characters as heroes and leaders. Placed in a time predating these modern-day heroes, Garcia’s warrior woman is ahead of the curve.