The terms traditional and contemporary are as common as nitrogen and oxygen at Native art events, yet these words don’t advance thoughtful discourse about Indigenous art. Rather, they cripple it. Separately, they can be misused, vague, or trite—but paired together in a false dichotomy—they are insidious.

The contemporary era is our current era in art. If we want to advocate for Indigenous arts’ place in the global art world, we have to speak the art world’s language. Contemporary art follows modern art,1 and—depending on your perspective—begins in 1989 with the fall of the Soviet Union, advent of the Internet, and increase in economic globalization,2 or as early as 1945, with the end of World War II.3 Alternatively, contemporary art is defined as art made by a living person. “Look around you: contemporary art is most—why not all?—of the art that is being made now,” writes American art historian Terry Smith.4 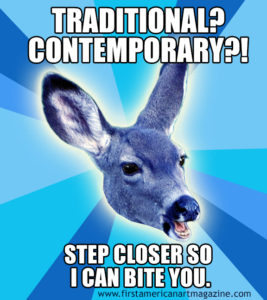 The English language is rich in antonyms, or binary opposites, such as hot/cold, good/bad, rich/poor, etc. This structuralist grammatical device influences the logic of English speakers. Pairing traditional and contemporary implies they are opposites. If contemporary is new, then traditional must be old. One of the most persistent stereotypes of Native peoples is that we live in the past. Anthropologist Beatrice Medicine (Sihasapa Lakota, 1923–2005) used the term “ethnographic present” to describe how tribes are presented in the literature as forever frozen in a pristine past that only exists in the imagination of anthropologists.5

Today Native people may not be stereotyped as vanishing, but our languages, cultures, and artistic practices are viewed as on the precipice of disappearing. If Western art is perceived as present and Indigenous art is past, the message is we have no place now or in the future. Yet, instead of disappearing, many Aboriginal art forms are being revived. Shell engraving, Ravenstail weaving, babiche bags sewing, twining, skin-sewing, and many other Indigenous art practices are more common now than 50 years ago.

In the larger art world, traditional means established. Modern art, ca. 1860s to 1960s, revolted against established art forms; however, postmodern art of the late 20th century was no longer threatened by history. From the 1980s onward, artwork is rich with historical references.

Additionally, Native people are not oppressed by the weight of our art history. Our histories have deliberately been stolen from us—suppressed, vilified, and hidden away in remote museum basements.

From a Native perspective, traditional suggests embodying tribal values, speaking one’s language, participating in ceremonies and dances, respecting elders, keeping tribal practices alive—basically what most of us see as desirable traits we wish to embody. In this context, the opposite of traditional is assimilated.

How can there be a traditional style or a contemporary style? Several Native art markets and shows cleave artwork in categories called contemporary and traditional. This implies some underlying timeframe divides these concepts: Indigenous peoples made certain arts prior to European contact and other arts post-contact; however, upon closer examination, this assumption falls apart.

The easel arts, so-called fine arts, were all present in the Americas prior to contact: tempera painting on woven cotton canvases, marble sculpture, monumental architecture, and much more. Mass production is seen as inherently non-Native, but the Moche, Lambayeque, and other precontact Andean civilizations mass-produced tens of thousands of ceramics using molds. 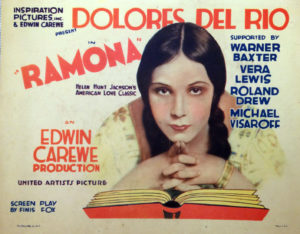 Why are items made with honeysuckle or Job’s-tears deemed traditional when these plants were both imported from Asia in the late 19th century? Jennie Ross Cobb (Old Cherokee Nation, 1881–1959) developed her first photographs in 1887. James Young Deer (Nanticoke, 1876–1946) directed his first film in 1909, soon to be followed by Edwin Carewe (Chickasaw, 1883–1940). Why are Indigenous photography and filmmaking still struggling for acceptance in the public perception of Native art? Instead of following any kind of timeframe, the arbitrary designations of traditional and contemporary rely on the lingering stereotype that Native Americans should use natural materials such as plants and should not harness technology and machines. We know this to be untrue. Let’s not reinforce these misconceptions.

Once, I overheard a judge declare a woven Navajo rug to not be traditional because it included red yarn, despite the fact that first-phase, Navajo chief’s blankets from the mid-19th century contain red. The same judge then praised a “traditional” tear dress, even though tear dresses were invented in 1969.5 No “experts” possess a working knowledge of the historical practices of every single tribe, so the concept of traditional art is applied capriciously. A much less arbitrary approach is to organize artwork by media and then process (for example, pit-firing and kiln-firing).

Some artists take great pride in harvesting their own materials, e.g., clay, earth pigments, or plants for dyes or weaving, and processing their work using Indigenous methods, such as pit-firing ceramics, developed prior to contact. The people in the year 2020 who hand-carve wampum, stone marbles, or steatite tobacco pipes aren’t traveling back in time; these artists are making deliberate statements about the importance of process, materiality, and the artist’s hand in the work.

As Native artists work with techniques that have been handed down, they work as contemporary artists to keep these methods alive. Just as importantly, Native artists who work with new media or in contemporary forms—but bring cultural philosophies into these forms—are often working with the same cultural accountability, a philosophical tenet that transcends chronology or material.

I hope you enjoy Indigenous art—current and historical. I hope you encounter challenging and brilliant Native art in a wide range of media during the many Native art events to come. And I hope fresh and accurate terms are used to describe the art.

Why is the false dichotomy between so-called traditional and contemporary art so insidious? Contemporary art is art from a certain time period, usually defined as being after World War II to the present day (1945–present) or from the fall of the Berlin Wall and rise of the Internet (1989–present). It’s a chronological term. Traditional refers to the culture of one’s tribe, whether religious, artistic, social, or material.

The implication is contemporary, usually exemplified by Western art media, materials, and messages, is new. Therefore,  traditional, as exemplified by tribally specific, Indigenous art practices, must be old. I have watched art forms specific to my cultural region, the Southeastern Woodlands, increase in practitioners and scope within my own lifetime. For instance, more Southeastern ceramic artists and shell carvers are active today, than 25, 50, or 100 years ago. Tribal arts are contemporary, tribal artists are actively contributing to and responding to current events, and our customary practices will continue well into the future.